Google My Business: Five good reasons to regularly check the information about your points of sale

Actively managing your stores' online presence is a first step in your web-to-store strategy to convert mobile users into real-life shoppers. Here's why and how.

Not sure how to manage your pos data in Google My Business.
Check this here!

1) Internet users are increasingly searching for points of sale

Since 2011, use of the "Search nearby" feature has increased by a factor of 34 on Google, and it has almost doubled in the past year alone. A lot of these searches are for stores or restaurants. The good news: the searches are rarely for brands, but rather for generic terms: "hairdresser nearby", "shoes near me", "restaurant near me", etc.

2) People search for points of sale on their smartphones

According to Google's statistics, 80% of local searches originate from a smartphone (statistics from 4th quarter 2014) In other words, your potential customer is already near your store when they are making their search!

3) Web-to-store is a reality: smartphones are leading customers to you!

Since mobile phones have become so prevalent, the Web is your point of sale's best friend. Did you know that, according to a Google study, 50% of consumers who make a search on their smartphone visit the point of sale they found within 24 hours and that 18% of them make a purchase!

According to the US consulting firm Shoppertrack, in-store visits during the Christmas shopping season decreased 55% between 2010 and 2013. However, according to MasterCard, in-store sales increased during that same period. In other words, shoppers are visiting stores less often, but they're buying more. Let's put it another way: more often they already know what they want when they enter a store, and they're coming in because they're certain that they'll be leaving with what they're looking for.

5) Your competitors are playing heads or tails on Google

According to a study we conducted last year, the majority of retailers do not correctly list their points of sale: only 34.2% of listings on Internet are correct. On Google, the percentage increases to 46.7%. That's less than a one in two chance of finding the right information! This represents an incredible opportunity for you: if you provide the right information about your stores, you could use web-to-store to attract mobile users to your points of sale.

Are your point of sales well positionned on Google? Are you sure? We'll check this for free for you: 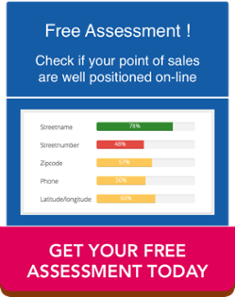 Not using Google My Business? Google will deactivate your points of sale!

If these five good reasons aren't enough to convince you, here's a final one that might do the trick. Put simply, if you don't sign in often enough, Google will start to wonder if your points of sale still exist or if you're really the person who legitimately manages their online presence. The immediate consequence is that your points of sale will stop appearing in Google Maps and in mobile searches. Right now, Google says this happens after six months without signing in.  But as the saying goes, better safe than sorry.

Web-to-store: an augmented reality on holiday!

Double the visibility of your points of sale with Google My Business?